Live from 37,000 Feet - No kidding - Live Broadcast from a Lufthansa flight!

Ok. This one was cool. 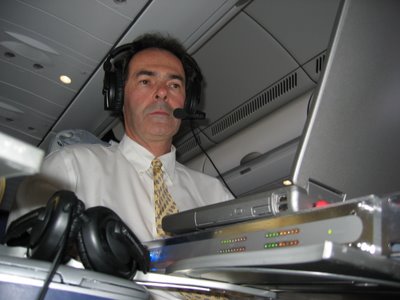 This is the first broadcast of it's kind. Engineers Mike Worrall of Travel Today and Lars Hanson from Boeing Connexions demonstrated extreme determination and a bit of courage to make this broadcast a success using Connexions by Boeing, a Comrex ACCESS and the public Internet. 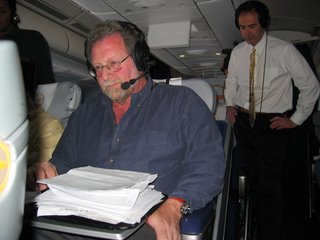 Peter Greenberg -NBC TV's Today Show travel editor and host of the weekly, nationally syndicated radio program Travel Today - regularly delivers live broadcasts from difficult locations, so it should be no surprise that he was determined to be the first to do the impossible. It had been seen as "the holy grail" of remote broadcasting to deliver a show from an airplane at altitude during an intercontinental flight. But Peter not only sought the holy grail, but the largest challenge of all, a LIVE TALK SHOW including taking callers from the air.


Travel Today engineer, Mike Worrall, first contacted Comrex with the concept in September, 2005 to discuss the possibilities of whet 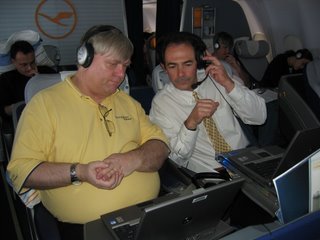 her the new Comrex ACCESS could rise to the challenge. Comrex engineers embraced this project and after reviewing technical specs for the new 'Connexion by Boeing' internet service, determined that, while very difficult, this concept was theoretically possible. The team of engineers, including Travel Today's Mike Worrall, Boeing Connexions engineers led by Lars Hanson, and the ACCESS development team led by Tom Hartnett of Comrex, worked for months in the lab to tweak settings and simulate real world conditions. It was determined that this broadcast would be attempted.

Ever conservative, Comrex cautioned that the transmission delay was likely to be staggeringly long and suggested that perhaps taking callers would be unrealistic. This was based on the complexity of the transmission path. In a nutshell, from the ACCESS codec in th 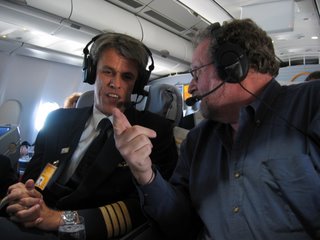 e airplane, the audio was transferred via WiFi to the satellite dish on the top of the plane where it was shot to the Boeing satellite. It was then sent to the relay station in Littleton, Colorado, where it was sent via public Internet to Travel Today's studios in LA. Then it was sent by ISDN to ABC uplink in New York and then distributed to the listeners. Comrex team listened on the Las Vegas affiliate, KNUU, however absent a decent AM receiver, it was necessary to resort to listening to KNUU's web stream on a laptop using EVDO. The excitement grew when witnessing this ground-breaking event. Callers were aired, and it sounded fantastic!

Needless to say, this broadcast was an unmitigated success. The audio was remarkably clean for the duration of the 3 hour broadcast. Thanks to the hard work of the all the engineers involved and the persistent determination of Mike Worrall and Peter Greenberg, history has been made.