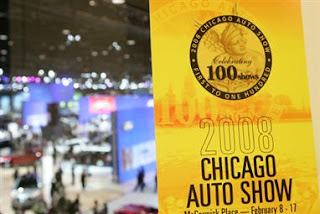 Chicago, IL -- ACCESS has certainly been thrown into a lot of situations lately where unexpected ISDN difficulties put BRIC Technology in the "go to" position to get the remote on the air. Chicago's legendary WGN recently found itself with no ISDN lines installed on the day of broadcast. Luckily, afternoon personality Steve Cochran was able to broadcast his show with the help of an ACCESS portable and a DSL line. 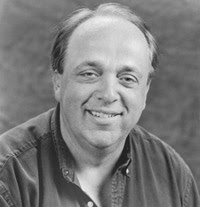 "When I bought the Access system it was partly because I knew in the future it might be harder to get ISDN and I was looking for alternate technology for our remotes. I did not think that would happen for a while but I got a surprise taste of it this past weekend. 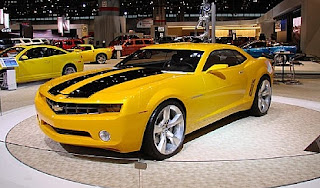 Chevrolet's Camaro BumbleBee concept car
For the past 20 years we have had live broadcasts at the Chicago Auto Show. Some years it is only an occasional drop in but for the last three years we have been doing 9 consecutive days and two shows per day, including our entire afternoon drive show from 4PM until 7PM followed by a two hour sports talk show. For this show the client, Chevrolet, provides a space within their display area for our shows to originate from and they order the ISDN and POTS lines through the McCormack Place audio/visual group. For some reason the person ordering the lines ordered 4 POTS lines and an internet access line instead of an ISDN line. The display and lines are put in place the day before the first broadcast so we did not know until we went there to set up on that day before that there was no ISDN line. The A/V people could not get it changed before our first show so we were going to have to use our POTS Matrix unit for this show. I decided to give the BRIC a shot at this with the Matrix as a backup. It worked great. The delay was almost as short as ISDN and it was definitely less than the Matrix. We did all of our shows on Friday and Saturday on the BRIC. By Sunday we had the ISDN in place so we switched over to our Nexus with the BRIC being used as backup. It sounded great though. I used the AAC-LD algorithm. The most important thing is that the delay stayed constant and there were no interruptions or glitches during a 5 hour broadcast Friday and two additional hours on Saturday.
The attached audio cut demonstrates how it sounds. All of the voices you will hear are originating at the remote except for the traffic reporter at the end of the cut. I hope the audio is useful to you in evaluating the actual performance of the product. Needless to say, I was quite pleased to have the BRIC available." 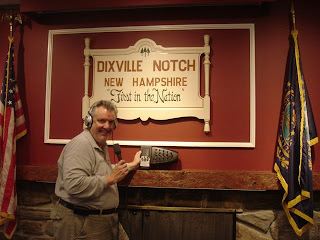 Dixville Notch, New Hampshire -- The last time we saw WOKQ's Mark Ericson, he had just commandeered a SnowCat and was broadcasting live from the top of ice-covered Mt. Washington. This time he's moved the show indoors to report live from the nation's first polling place in the U.S. Presidential Primaries. Even though there are only about 75 residents in this small (but lovely) town, all of the registered voters (which this year numbered 17) gather at midnight to cast their votes. The polls then close at 12:01 a.m. and Dixville Notch's election results are broadcast throughout the world. For this year's primary, WOKQ listeners were getting a live, firsthand account thanks to their new ACCESS Portable codec. Hey Mark, where's your cool hat?
Posted by Remote ACCESS at 12:32 PM No comments: