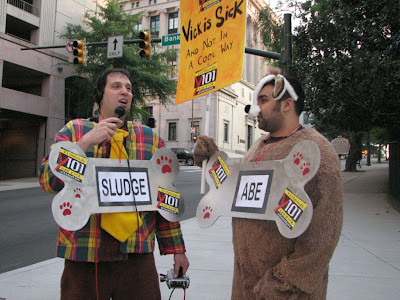 At Comrex we love great remotes and we love our animals, too! So you can imagine how giddy we were to receive the great story below from our friends at WDYL in Richmond, VA! In the midst of the allegations of illegal dog fighting, Atlanta Falcon's quarterback Michael Vick was scheduled to make an appearance for arraignment at a Richmond courthouse on August 26th. Enter Sludge and a few other "strays" from the Morning Sludge on Richmond's "Y 101 New Rock"!

Jon Bennett, Director of Engineering for Cox Radio Richmond sent us the details: 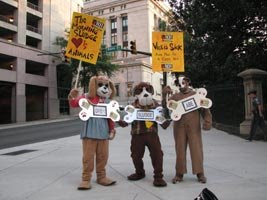 "This morning, our morning show team from WDYL was outfitted in dog outfits and did a live morning show broadcast from the front of the courthouse in downtown . 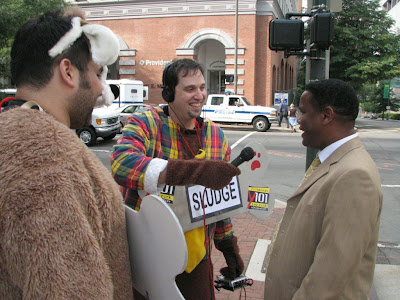 This was all to do with the Vick controversy and he coming in to the courthouse.

The morning show team was ecstatic with the system performance.

Sludge, the morning show host said, 'We could have not done the show with any other system.

We had total mobility to move freely around with the crowd.'

See the coverage on CNN, ESPN, WSB-TV Our COX Sister station in and Inrich.com.

They were inundated with interviews from the many media sources on the scene. 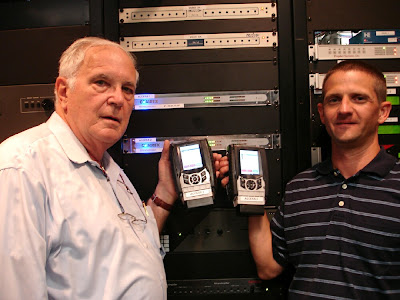 This was all made possible with the technology and expertise 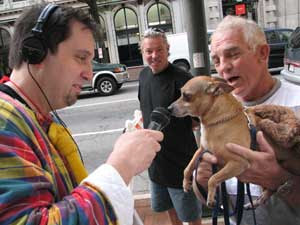 I mean, it must be the ACCESS that is attracting all of those beautiful women, right? We're pretty sure it's not the guy (although he doesn't seem to mind.) 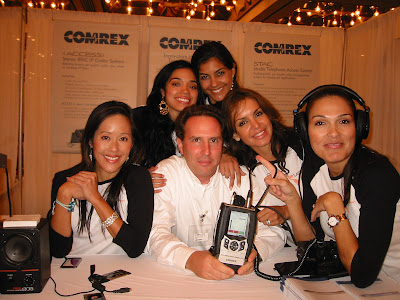 Anyway, pictured here is Comrex employee, Chris Crump working hard. It's a tough job, but somebody's gotta do it. I am optimistic that when Christopher comes up for air, he will have a look at this blog and appropriately edit this story to tell you where he was, and what he was doing. (Aside from the obvious, that is. :o)

Chris Crump (in defense!) adds: "Wow! Tough crowd! But as a truly dedicated professional and seasoned "road warrior" I'm used to being misunderstood. My life on the road is NOT ALWAYS this glamorous! But at the recent Latin American Broadcast Show '07 in Miami, FL, ACCESS certainly attracted the attention of broadcasters (and supermodels) from Panama, Venezuela, Columbia, Ecuador, Argentina, Brazil, Peru and several other South American nations. There were even a few broadcasters visiting from Spain! My colleagues, pictured above, served as "technical consultants" and translators for some of the more challenging dialects that were represented by conference attendees. Sandra and Lisset (to my left) were particularly helpful in explaining the features of the ACCESS Portable as well as our other products on display.

Now, if only I can convince my bosses that I needed Spanish-speaking technical consultants for the South Dakota Broadcasters Show..."
Posted by Remote ACCESS at 2:18 PM No comments: