Here at Comrex, one of our favorite "off the clock" pastimes is "Facebook stalking." We've checked with our attorney's and have learned that its perfectly legal.  Anyway, an unnamed Comrex FB stalker...er...person stumbled across this lovely photo: 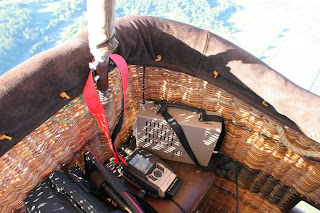 We weren't exactly sure what was going on in this photo.  Perhaps a nice Remote Gift Basket?  But wait!  It appears that there are trees in the background...several hundred feet below.
Well, naturally we needed to find out more.  After a bit of digging around, we sent a note to the owner of the Facebook page and received the following:
Dear Comrex,
I'm the news person at 610 WTVN who loves it when engineering lets me play with our toys, so I was quite blown away by your request and am VERY happy to help you. The Access is a fantastic piece of equipment. 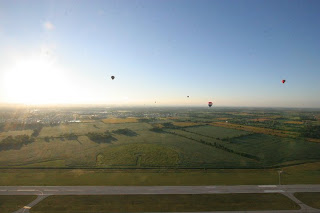 We were invited to ride-along in a hot air balloon to help promote the Grove City Balloons and Tunes Festival near Columbus. When I got the assignment Thursday afternoon I ran straight to our engineering department and asked about doing a live shot from 2,000 feet up. It didn't take long for them to develop a plan and the first place they looked was the shelf with our Comrex Access on it. We'd tested it in the field a couple of times in the news department. The most recent use was a visit to a Columbus family's backyard by President Obama a couple of weeks ago. Our biggest concern was how the cell coverage would be in the air. We got up to about 2,500 feet and even over a rural area of Franklin County, Ohio we had decent cell service from AT&T. We had some droppouts, which we expected, but the unit did a great job, also as we expected. Thanks so much for making a GREAT product like the Comrex Access - so easy even a news person can use it!
I called our Chief Engineer, Greg Savoldi, to tell him about your request. He expects a new portable unit in exchange for the photos ;)
matt bruning

newstalk 610 wtvn
news reporter/anchor
Matt, thank you very much for the letter and the great photos!!  Greg, you're an old buddy of ours and we really like you.  But, come on!  We might be able to scrounge up a very nice ARC t-shirt for you and Matt.
Posted by Remote ACCESS at 10:44 AM No comments:

With nearly 50,000 Scouts, Scouters and volunteers gathering together at Fort A.P. Hill, Virginia to celebrate the 100th Anniversary of Scouting in the U.S., the 2010 National Scout Jamboree became the State of Virginia's 13th largest city...virtually overnight. Scouts from all over the world arrived on the Jamboree site on Monday, July 26th for the 10-day event. As they arrived, they were greeted by music, news and information provided by QBSA, 102.9 FM, The Eagle! The low-power FM was operated under a Special Temporary Authority granted by the FCC to the Boy Scouts of America for the limited duration of the event under the call sign WB4XSA.

Earlier in 2010, Comrex was contacted by the Boy Scouts to find out about improving the quality and flexibility of QBSA remote broadcasts from around the sprawling encampment. With a couple of Eagle Scouts on the Comrex staff, how could we refuse? So, armed with some ACCESS Portable codecs, we took advantage of the AT&T 3G and Wi-Fi service that was specially implemented for this event. Not only were Comrex ACCESS codecs used for daily remotes but they were also used to broadcast the live arena shows which were carried live on QBSA and streamed on the web for worldwide broadcast.

In addition to providing our own gear, other vendors were recruited to assist and were more than happy to help support this effort. Wheatstone, ENCO, Symetrix and BSW all provided equipment and supplies to help get the three studio facility on the air.

One of the primary missions of QBSA was to give Scouts the opportunity to "DJ" their own 15-minute air shift. Scouts were given a 20-minute training course to cover the basic of radio broadcasting and then allowed to select three songs to play on the air.  All Scout shows were produced in the giant QBSA Boom Box from 9 a.m. to 5 p.m. each day.  Its estimated that between Scout air shifts and live interviews, nearly 2000 Scouts got on the air.

Expanding the overall reach of the station was a live web stream that was accessed from the Jamboree's home page. Listeners were tuning in from all over the globe and making requests on the QBSA Facebook page. Family and friends of Scouts posted their requests and shout outs from as far away as Saudi Arabia, Ireland, Sweden, Australia and all parts of the U.S. The station proved itself a vital link to Jamboree for parents of Scouts back at home. In just ten days, QBSA's Facebook page grew to nearly 2600 fans!

QBSA was truly at the heart of the Jamboree. The station featured live interviews with television host Mike Rowe (from Discovery's Dirty Jobs), rock band Switchfoot, and even an evening of Latin music called Latin Connection that was attended by Scouts from several Latin American nations.


The next National Scout Jamboree is scheduled for 2013 at its new permanent home, The Summit Bechtel Family National Scout Reserve in West Virginia and QBSA will be there broadcasting live.
Posted by Remote ACCESS at 1:05 PM No comments: