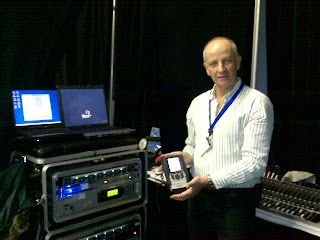 Manchester, NH -- Comrex recently made the quick trek up to the 2008 New Hampshire Presidential primaries and we were delighted to see several of our customers broadcasting live coverage via ACCESS. This article appears in the current issue of the BBC's in-house magazine, Ariel, submitted by Radio 4 correspondent Lee Chaundry:

"Just like Hillary Clinton, The World This Weekend came good in New Hampshire, thanks to a new piece of kit

Lee Chaundry:
Just when you think you know the routine for a radio OB, something can come along and catch you out. Most of the time we broadcast using ISDN lines installed by telecoms companies. Or we can use a satellite if it’s somewhere more remote. The costs are around £300 per ISDN line and an expensive £3 per minute for a satellite.

The technique is reliable and works well. So, imagine when BT announced that within the none too distant future it would be suspending its ISDN service in the UK. The only other data service that is available universally is the internet. But it’s not designed to carry high quality audio for live broadcasts. You can do your shopping from your armchair, but you’d be hard pushed to get Today on the air. Anyone who has ever used Skype or other voice over internet protocol (VoIP) services will know there can be delays of seconds, or the person you’re talking to suddenly sounds as though they’re speaking through a vocoder on a 90s Cher record.

Radio news operations has been trailing different technologies to overcome this for some years – with limited success. Whenever we’ve used VoIP equipment the same problems with delay and ‘glitching’ have prevented us using the internet as a means of transmission.

That is until recently when a small US company called Comrex released its Access VoIP equipment. According to production types the unit looks as though it should dispense bus tickets, but it works for live broadcasting over the internet, which is a huge breakthrough in our search for a replacement for ISDN. However, I had never used it as the main broadcast line – until the New Hampshire primaries, that is.

On arrival, with a metre of snow, I pushed past the hundreds of US TV networks camped out in minus 10 degrees and checked into my hotel. I scanned the floor for the ISDN lines I had requested. Nothing. No lines – no programme. It looked as though the Comrex was about to have a baptism of fire.

We did have a stable, pretty fast hotel WiFi connection so I unpacked and booted up the unit, which provided a high quality, low delay line back to TVC. Only this time I wasn’t testing or playing around. This time the unit was going to get The World This Weekend on air in just two days time.

The Comrex remained stable without glitching or ‘dropping out’. It actually provided a better quality line than those over ISDN. And it cost us absolutely nothing. If we’d used a satellite for the equivalent time – ie two days – it would have cost around £13,000. ISDN installations would have been around £500. Quite a saving.

So it seems I can now do my shopping over the internet while also broadcasting Today. Who said you can’t kill two birds with one stone?"

Other ACCESS users that were on hand and transmitting to the masses included XM Satellite Radio's P.O.T.U.S. 2008 channel and KTAR-FM/Phoenix. Boston station WTTK-FM (pictured at the bottom) had ACCESS standing by for backup duties. Several other Comrex users were broadcasting from "Radio Row" sponsored by Talk Radio News Network and TALKERS Magazine. 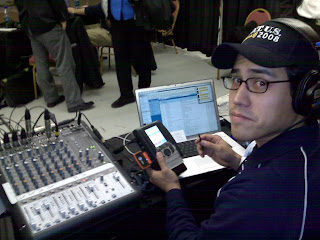 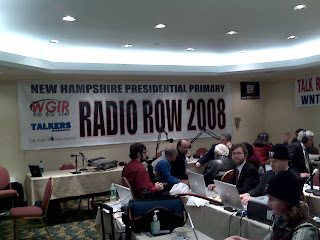 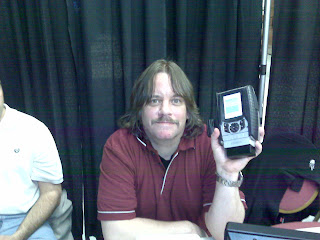