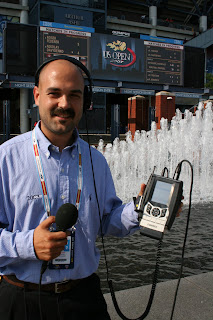 Thanks to a stroke of luck, for the past six-years - on top of screwing around from 5a to 10a on KTTS-FM in - I've also been known as "The Voice" of the U.S. Open, the final Grand Slam tennis tournament of the year. Each year, from my perch in Lower Broadcast from Arthur Ashe Stadium in , I curse the antiquated gear we've used for daily broadcast...[curses deleted by Comrex!] :-) 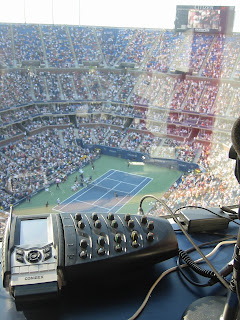 Can you tell I'm anything but technologically savvy?

Anyway...for awhile now, I've been reading about the assortment of clean-sounding, high-bandwidth technology soon-to-be available for broadcast over the internet, and when I heard about the Comrex ACCESS, I was dying for a test-run. Thanks to COMREX's generosity, my wish came true during the 2007 Open...

...and what a GREAT piece of gear - and easy to operate!

I am an idiot. Ask anyone who knows me. Thankfully, my engineer in set-up the ACCESS Receiver in the studio, and I checked the light-weight, compact ACCESS Portable onto my Laguardia-bound flight.

Upon arrival, I simply connected the ACCESS Portable to an I.T. approved United States Tennis Association T1-line, added a new remote, typed in the destination I.P. address for the ACCESS receiver - and BLAM, I was instantaneously connected to the KTTS-studio with high-bandwidth, crystal-clear sounding audio...Needless to say, it was a little alarming for those who had no idea I was test-driving the ACCESS Portable, because it sounded like I was IN THE STUDIO. 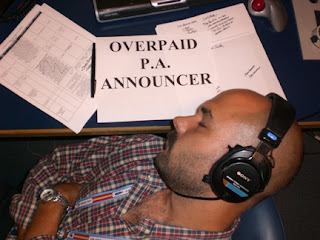 Not only does the ACCESS audio sound clear, broadcasting through an I.P. address - but it also freed-up the studio's phone line, so that I could record phone calls with the crew in the studio, without having to endure the steps of conferencing lines. I'm not kidding when I say - listeners who had no idea I was two-thousand miles away, also had no clue that I wasn't even in the studio each weekday morning...to them, it sounded like I was right there in . What a plus! 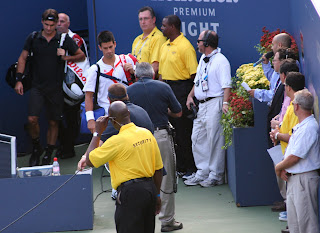 With the ACCESS Portable Mixer, I was able to use multiple microphones for guests, and I was able to pre-produce audio for the show, so I could play it cleanly, real-time while we were on the air - all while remaining "miced-up" with the show. Could you have made this any easier for me?

Thank you again, Comrex - for the ACCESS technology, the multiple profile audio options, flexibility of set-up (this thing even works well with Wi-Fi when it's receiving a strong-signal), ease of use (for idiots like myself), but most importantly, for granting my wish of clean-sounding audio during the 3-weeks that the Open dominates my existence.