Over in England, our friends at Vortex have been working with the BBC on some trials using the Access over VSAT. Jon Clark takes up the story…

"One of the impacts of so much on-demand radio is that the stations themselves need to play to their one great strength, live content. Being one of the world’s largest providers of on-demand services, the BBC is only too aware of this. They have therefore launched the “Edge” project which aims to look at new methods for linking live to OB vehicles, including alternatives to the traditional UHF radio car. They already make extensive use of the Matrix over GSM and are interested by the prospect of going a step further, providing very high quality OB audio, including the possibility of stereo. 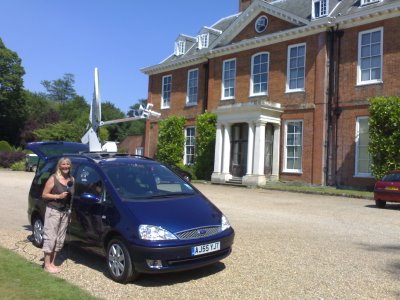 To that effect, they have built three experimental vehicles, all kitted out with self-seeking VSAT dishes. Once the vehicles are commissioned, they will travel around the UK spending 2 weeks at one of their local radio stations before being moved onto the next. This way, everyone will get a chance to see the technology, use it in the real world and provide feedback to the project.

The vehicles themselves are Ford Galaxies, which are considered fairly large here in Europe, but by US folks’ standards are probably something small for popping down the mall. They’re big enough to hold all the kit and up to four people whilst still feeling like a normal car to drive so as not to scare off journalists of a nervous disposition. Once parked up, a simple couple of button presses gets the dish aligned in a few minutes and the internet is then available.

One of the vehicle’s first home was BBC Radio Kent in the southeast of England. It turns out that its arrival was timely because the day before had seen their radio car involved in a small altercation with another vehicle. It would be unprofessional of me to mention who did it but I do understand that it was her first such misdemeanour in an otherwise blemish-free 20 years of service. Nonetheless, the radio car was going to be out of service for a few days so when I arrived, what was supposed to be a nice relaxing day setting everything up because a mad rush against time to get everything ready for the impending OB.

We were all set to go when the whole of the town was plunged into darkness by power failure. We’ve been having something of a heat wave in England lately and it seems everyone has been panic buying air-con units, which took the power companies by surprise. No problem for Radio Kent though because the emergency generator kicked in on-cue to keep everything on-air. As we left for the OB, we noticed a fire engine arriving at the neighbouring store to rescue people stuck in the elevator. It turned out to be rather fortuitous because ten minutes later, the aforementioned generator started a “thermal event” in the surrounding woodwork.

After all this drama, we were hoping for something a little more relaxed from the OB and that’s exactly what we got. The setting was the beautiful Squerryes Court in nearby Westerham, complete with its 17th century manor house, lake and historic gardens. The place is surrounded by rolling hills, which play havoc with the UHF signal from the usual radiocar meaning that, until now, OBs from that area have been strictly Matrix only. No such problems for the VSAT though which was up and running within a couple of minutes of arrival.

Since we had a fair bit of uplink bandwidth available, I had taken the liberty of upgrading the Access units with a sneaky Beta release kindly sent to me by Tom at Comrex, providing the addition of AAC algorithms on top of the usual lower bitrate BRIC offerings. These turned out to be just the job and we were able to run low-delay stereo AAC on the uplink at 128kb/s. The sound quality using this algorithm is highly impressive and this was verified upon our return by plenty of smiling faces. All in all, a very successful start and one that I’m sure the BBC will be building on over the next couple of months."

Very cool, Jon! The BBC certainly is resourceful at getting fabulous audio from anywhere!