Ok. This one isn't an ACCESS remote. They used a Matrix on GSM. But I was so charmed by the resourcefulness of Mike Ames, who engineered the remotes. 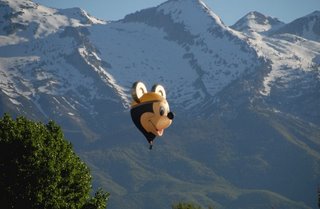 Consider the challenge. Mike was charged with delivering two weeks of remotes from 11 different cities. From a HOT AIR BALLOON!!!! Yup. You heard me right. He needed to use the Matrix on GSM while the talent was floating around in a balloon. One of the biggest difficulties was getting the talent to be completely self-sufficient. The talent needed to be able to bound into the balloon with all necessary equipment during the brief moment that the balloon was on the ground. 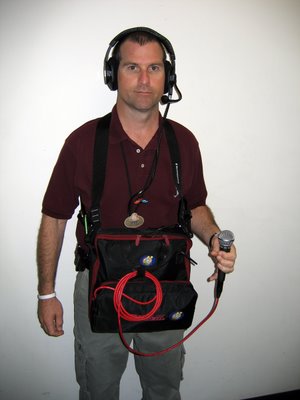 Creative engineering was necessary. Mike designed a way to modify a gear bag in order to be able to make a Matrix wearable including battery, GSM module, and antenna (as well as mics, etc). He did a heck of a job. Don't you think?

"You can tell my story. It was the "Happiest Balloon on Earth Tour" with Disney (celebrating the 50th anniversary of the park). The cities we went to were Tucson, AZ - Phoenix, AZ - San Diego, CA - Fresno, CA - San Francisco, CA - Sacramento, CA - Vancouver, BC - Seattle, WA - Portland, OR - Salt Lake City, UT - & Albuquerque, NM. We did mostly am remotes, starting at 05:00 am, except for Vancouver, BC which was a pm flight. Three or four of the cities we had 2 stations broadcasting at the same time, with only one station at a time actually flying in the balloon. When a station did fly in the balloon, they were generally in the air for around 45 minutes. Whether they flew in the balloon or were just tethered, the broadcasts were around 3 hours, from set up to strike of the balloon.

We were lucky enough to have the best pilots in the business, in Scott and Laurie Spencer who have flown for some 30 plus years, we also picked up crew members for the balloon set up and strike in each city. Besides engineering the remotes in the morning, I had to actually assist with the crewing in the pm, which made for a very long day. But it was truly a great experience, and I learned a lot about being in the middle of no where trying to do a Live Broadcast, what a great challenge."

Mike used T-Mobile and was successful in all locations with no exceptions. This is surprising and delightful to us at Comrex, as we have been hearing more and more horror stories about GSM carriers dropping support for CSD. We are theorizing that perhaps being Disney doesn't hurt?
Posted by Remote ACCESS at 1:58 PM