It's always a wonderful thing to take a phone call from a happy customer especially when they have wisdom and cost-savings advice to pass along to the rest of the Comrex users of the world.  Michael Love with Jasper, Texas' KJAS-FM called us to share the great results he had using a Hughes Directway satellite IP connection with his ACCESS portable to broadcast a high school baseball game. Read the article from the KJAS website (below) for the details. 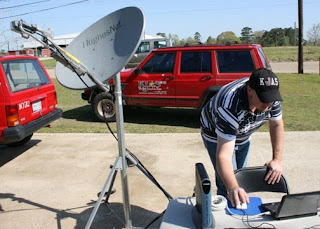 KJAS engineer Michael Love made last minute adjustments to the satellite uplink on
Tuesday in front of the radio station, just a few hours before the first satellite
broadcast was made from Diboll.
"Those that listened to the Tuesday evening baseball game between Jasper and Diboll on KJAS radio did not know it, but they were part of history making event. On that evening, KJAS and Rayburn Broadcasting Company, became the first radio station in Southeast Texas or Southwest Louisiana to broadcast a local event by satellite. Even though the practice has been commonplace for television for some time, it was radio’s turn to move to the extraterrestrial mode.

The voice of the Bulldogs, Art Lay and all background sounds of the game were first converted from analog to digital by a Comrex ACCESS codec. The digital data stream was then transmitted from the ball field in Diboll, roughly 22,000 miles up to a satellite in geo-synchronous orbit. The broadcast came back down to an earth station in Germantown, Maryland and was routed by way of the internet back to a Comrex ACCESS rack unit int the KJAS studios here in Jasper.

Over the years, KJAS radio has used various means to bring audio from remote locations back to Jasper, including both vhf and uhf radio, along with analogue and digital transmissions over conventional telephone lines. KJAS has also used both cellular phones and high-speed network cards as well as the internet to deliver the audio. Unfortunately, sometimes, none of the above services are available at remote ball parks, preventing a broadcast from that location.

The satellite system now in place at KJAS gives the station the ability to go anywhere in the world and bring a crystal clear broadcast back to Jasper and the surrounding area."

Now, what Mike's article above doesn't mention is that he was able to put together the hardware for the Directway connection for less than $200 USD.  The service that KJAS uses only costs about $60 per month with a data plan that more the covers the amount of data required for broadcasts using the ACCESS.  Data plan limitations are based on download usage and NOT upload usage which is, for ACCESS customers, the important part of the equation. Michael also fashioned the satellite dish's tripod himself to provide a sturdy, stable and portable mounting solution.  If you'd like to contact Michael Love about his innovative and cost-effective use of available technology, send him an email at: mlove@kjas.com

Thanks for sharing, Michael!
Posted by Remote ACCESS at 12:24 PM