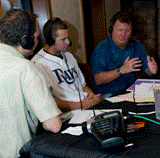 Tampa, FL -- Ah! Spring is in the air. The smell of the grass and the crack of the bat. There's nothing quite like Spring Training in Florida! Fans of the Tampa Bay Rays have a lot to be excited about this year with a new look, great new talent and the prospect of 80+ wins this season. The Rays' broadcast team is also looking to score with fans by doing lots of great remotes this season. Armed with their new ACCESS Portable and Mixer, the Rays have been doing weekly remotes during Spring training for locations all over the Tampa Bay area.
Traditionally, the Rays have relied on ISDN or POTS for their remote broadcasts and ACCESS is usually in the "on-deck circle" as a backup. Well, at a recent remote at Champp's Sports Bar, Rays broadcasters Andy Freed and Dave Wills were all set to do their "Hot Stove Show: Countdown to Opening Day" live from the local eatery. But just moments prior to the broadcast, panic ensued when the ISDN line dropped and wouldn't reconnect!

Luckily, ACCESS was running and ready to go connected via Wi-Fi provided by the restaurant. It was a good thing too! The broadcast featured an interview with the Rays' new owner, Stuart Sternberg, as well as Rays' 3rd base prospect, Evan Longoria.

"ACCESS was connected and the broadcast was flawless. We were really up against it in the last minutes before the show and ACCESS really came through for us," says Rich Herrera, Rays' Director of Broadcast Operations. "We've been using ACCESS in a lot of different applications and plan to use it extensively for pre and post-game shows as well as various other remote broadcasts that we provide to our radio network affiliates throughout the season. Herrera continues, "We had been looking for a way to get mobile with our broadcast so we could talk to fans outside of the stadium or just be more spontaneous regarding our broadcast locations. By using widely available IP circuits like Wi-Fi, 3G cellular and broadband connections, ACCESS Portable is really the perfect solution for our operation." 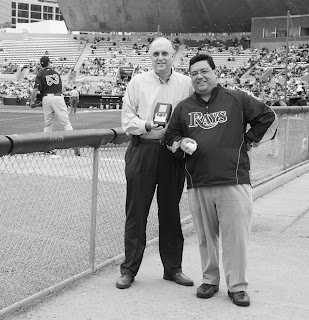