ACCESS Portable at Wembley in the UK - Thanks Vortex!

Here's a great story sent to us by the Comrex dealer in the UK, Vortex Communications. We love what they're doing with the ACCESS!

The childhood dream of many an Englishman is to one day play soccer on the hallowed turf of Wembley, the national stadium situated within the suburbs of . To achieve this dream, however, is easier said than done. Unless you become one of ’s elite players and are lucky enough to be picked for the national side, your only hope of pl 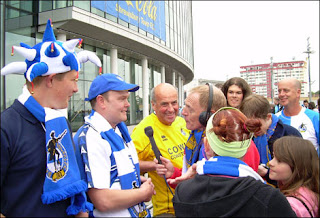 aying Wembley is to reach one of the league play-off finals. These are played at the end of each season between the teams who have topped their leagues and the winner is promoted to the next league up. Reaching the play-off final is a huge occasion, but particularly so this year because, having hosted nearly a century of soccer, the old stadium was recently demolished and a spanking new state-of-the-art replacement erected in its place. The new Wembley was ready just in time for this year’s play-offs which were all played over the May bank-holiday weekend.

One team who reached their play-off were who booked a final with Bristol Rovers. is a modest town with only 70,000 inhabitants but it seemed like pretty much all of these were trying to get to the game. For those not lucky enough to get a ticket, BBC Radio Shropshire were there to describe events before the game, interview fans and generally soak up the atmosphere. What they needed was a way for their reporter to be fully mobile but able to send good quality, low-delay live audio back to the studio and, of course, receive talkback at the same time. Cue the Access portable.

Jon Clark from our dealer, Vortex 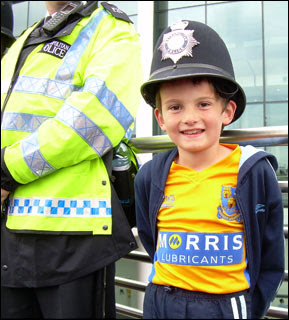 Communications explains the setup. “We’ve got very good 3G mobile coverage in the UK these days and most of the operators are now also upgrading their networks to the even higher speed HSDPA. This gives us 384kb/s up and 1.8Mb/s down so it’s possible to run just about every mode the Access supports, including the optional AAC codecs. In the case of the playoff, everything happened last-minute and there was no time to get an Access rackmount installed at the studio, so we used a unit already working at instead and relayed the audio from there over ISDN G722. This meant that there was no point in using anything more than HQ1 because that already sounded better than the ISDN! Although everyone was thrilled at the quality, I was a little bit disappointed because I knew that the Access was capable of even more and that would have blown them away.”

The pre-match show was a full two hours long and the Access performed magnificently. Darren Shearer, the Broadcast Engineer taking care of proceedings sums it up nicely. “The Comrex Access was a lifesaver. It allowed us to get to places that other technologies couldn't. The portable unit was so easy to use and setup; Presenters described it to me as being as easy as "Turn it on, select connect, set your levels, then broadcast!” The Quality was amazing, so crisp and clear that you could mistake the reporter for being in a studio. The delay was hardly noticeable which allowed for talkback and phone callers to be interviewed by the reporter on the Access. This is a great piece of kit and, until now, I've only dreamed of it being on the market. Great job guys!!”